Racism. It Stops With Me acknowledges Traditional Custodians of Country throughout Australia and pays respect to Elders, past, present and future. Aboriginal and Torres Strait Islander peoples should be aware that this website may contain images, voices, or names of deceased persons in photographs, film, audio recordings or text.

A group of empowered colleagues at the University of Sydney created the Mosaic network with the aim to challenge the status quo about experiences, support and progression of culturally and linguistically diverse (CALD) colleagues. Mosaic is a unique combination of a grassroots initiative with executive support.

The trigger was the Vice Chancellor’s Sponsorship Program at the University of Sydney, launched in 2016. The program was a University-wide targeted effort to support CALD women with potential to move into senior leadership roles. This brought together staff from across the university who may not have otherwise had the opportunity to cross paths. The lack of representatives of multicultural backgrounds within senior leadership/management at the university at levels reflective of population diversity prompted some of the participants to think about what could be done to support CALD staff to their full potential.

In creating Mosaic and giving it robust foundations, we: 1) sought leadership buy-in; and 2) engaged with colleagues. Discussions in 2018 with team leads within the Diversity and Inclusion team and the Director of the Culture Strategy within the university were instrumental in assisting with developing the structure for the staff network. Equally valuable was the enthusiastic endorsement by the then Vice Chancellor when the concept of a staff network was pitched to him. He also agreed to take on the role as the first Executive Sponsor for the network.

We initially engaged with colleagues through a workshop which was open to all staff so we could listen to diverse voices and views. Some of the themes that emerged were that Mosaic should aim to increase visibility and influence the experiences of CALD staff at the university. Internalised stereotypes (for example, the negative or positive association perception of certain groups) and lack of social acceptance were highlighted by workshop participants as inhibitors to a successful culturally inclusive workplace while the role Mosaic could play was envisaged as providing networking opportunities, increasing awareness and influencing governance. 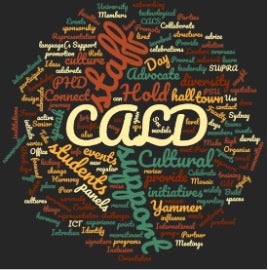 With the vision to create a workplace where cultural diversity is understood, accepted, and celebrated as a powerful asset for the university and to influence thinking within higher education institutions, Mosaic was launched in 2019, on the International Day for Elimination of Racial Discrimination.

The network has used several strategies to establish a presence within the university community including articles in the staff newsletter, a spectacular launch event and a tour of senior leadership committee meetings (Deans/Heads of Schools and Faculty Managers). Steering Committee members were selected through expressions of interest sought from across the university and aspired to equal numbers of academic and professional staff as well as gender balance. Mosaic follows a shared model of leadership with the Steering Committee led by three co-Chairs and is supported by an Executive Sponsor. Mosaic initiatives aim to reach out to our community of members, communicate with our stakeholders, contribute to, or create new actions. To achieve these aims we: circulate a newsletter to members and hold member meetings on alternate months throughout the year; organise workshops on topics relevant to our community; create opportunities to shift the workplace culture; and create safe spaces in which colleagues share experiences. For example, the Say My Name campaign aims to help others pronounce your name and signal additional languages by including this information in your email signature.

Mosaic collaborated with the University of Sydney’s National Centre for Cultural Competence, the Aboriginal and Torres Strait Islander staff network and the Culture Strategy office to create workshops to raise awareness and provide tools for staff who may encounter racism and microaggressions within the workplace.

Engaging beyond the CALD bubble

There are many challenges that are encountered by other minority groups, that are also true for Mosaic. The discrimination that people from minority communities face is immensely difficult to prove and quantify, which often leads to it being dismissed. Thus, it is very difficult for networks like Mosaic to collect evidence to create institutional change. One issue that continues to challenge us is: how do we get our efforts to resonate with people outside the interest groups they support? For many, these aren’t seen as relevant to their work. Our most recent partnership with other stakeholders has been to develop an Anti-racism pledge which encourages staff to listen, pause, reflect, and commit to take actions to create more inclusive spaces within teaching, research and other workplace practices. We hope that this will be a first small step towards overcoming this hurdle.

One issue we are still trying to influence is to count culture and identify the specific challenges facing different communities in a meaningful way. You can’t change what you don’t measure. The term CALD itself encompasses a heterogenous population and the challenges faced by some groups may not resonate with others. The intersectionality of other characteristics brings additional challenges to some. Actions to address equity are unlikely to be served by a one-size fits all approach.

The expectation of all staff to conform to and be appraised against the dominant culture is an ongoing challenge which we hope to shift in a positive manner. However, it is difficult to appreciate the extent of the problem because there is no safe space for stories to be told. We need to create an environment where people can share experiences without prejudice or penalty as well as positive stories that can be valuable to develop strategies to overcome barriers. We need evidence that can help identify areas where most problems occur and challenges to overcome these problems.

Initial approaches we have considered include making member meetings places where experiences can be shared confidentially and to promote initiatives which amplify positive CALD stories. A formal research project is being initiated by Mosaic to empirically explore the experiences of CALD staff within the university.

The responsibility of identifying and resolving issues continues to fall on individuals from the specific minority community.  There is limited buy-in from voices or perspectives outside the CALD community and there is a gendered disinterest in being involved in equity initiatives. Typically, men have been less engaged in equity initiatives on campus.

There are very real consequences that people from minority communities face when they speak up about the discrimination they experience and that is why networks like Mosaic are so important to create a supportive community. It is empowering to belong to a network like Mosaic. We have strength together because we can support each other.

The challenge of adequately acknowledging and compensating the additional workload that Mosaic and other minority group activists take on is on-going. Often our direct line managers do not know or understand the impact of the cultural load we bear. At Mosaic’s request, our first Executive Sponsor (then the Vice Chancellor) sent letters to the manager and head of department of Steering Committee members of all staff networks acknowledging their commitment to improving the culture of inclusivity at the university. One Mosaic Committee member has successfully negotiated to have this cultural load included in their individual workload metrics and Mosaic has asked HR to investigate how this could be incorporated into current systems at the university.

From supporting to action

In the 3-years that Mosaic has been operational, we find we are becoming an important resource for staff by creating safe spaces which allow CALD staff to share their experiences. However, a real challenge is how conversations we have as a group can actually guide action to address and overcome the obstacles we face: in other words, how do we go from being a support group to become an action group?  By creating a direct line of communication to senior executives at the university via our Executive Sponsor we now have opportunities to be heard at the highest levels.

More information is available at https://www.sydney.edu.au/.

Stay up to date with the Racism. It Stops With Me campaign. Sign up for updates on the campaign and information on anti-racism initiatives.